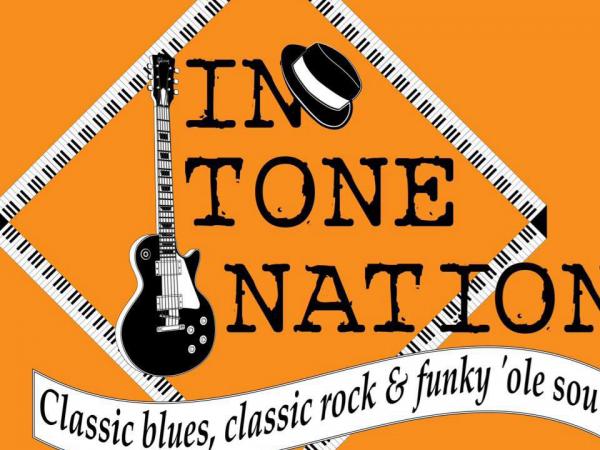 InToneNation is a six piece suburban Maryland band playing Classic Blues, Classic Rock & Funky 'ole Soul. We play high-energy, foot-tapping dance music that delights rock and blues and funk fans. Check out the shows! Featuring Maryland Hall of Fame guitarist, Joe Dyson on guitar, Gene Wood on sax, James Dail on bass, Dave Koplow on vocals, Mike Persh on drums and CJ Hoffman on keys. We light up every show with a performance that is fun to watch and music that is fun to dance to. Small or large, we play the venue and leave it all on stage!

We are always looking for opportunities for new venues and to book shows - we respond quickly and usually have multiple dates available for discussion - let us know by email about booking opportunities or if you are a band looking for teaming on joint bookings. We are open to agency bookings, as well. Thanks!

InToneNation began in the drummer's basement early in 2013 and had it's first booking shortly thereafter. In May 2014, we said goodbye to two superb musicians and all-around good guys, and founding members of the band, Michael "TJ" Jones and Al English. In November 2015, we parted ways with Joseph Anderson as a full-time band member and wished him all the best. It has been a great experience and joy to have known and played music with these guys!

In December 2016, we said goodbye to Dave Berman, one of the most solid guitarists in Maryland and a nice, all-around guy. He brought a bunch of songs to the band over the years, and we'll always remember him for his rousing "Thrill is Gone" rendition!
In January 2016 after an extensive search we added Gene Gene "the Sax Machine" with his four different saxophones. He is a one man brass section.

To start off the New Year 2017, we added C J Hoffman on keyboards and Maryland Entertainment Hall of Fame member Joe Dyson on guitar. These guys have played and recorded with some of the best musicians around the area and on the National scene and we're lucky to have them as core members of InToneNation. They are hitting the ground running, since they've played with us before.

Let's give a hearty shout-out to Stu MacKenzie for his amazing keyboard skill, help in forming the band and his sweet-heart character! Stu has a spot on stage anytime!